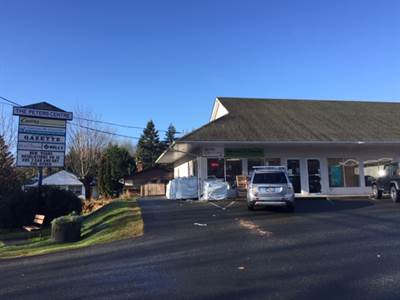 Wonderful business opportunity for the animal lover! The Cowichan Pet Emporium (1996) serves a 25 km radius with all their pet and grooming needs, as well as supplying pellets for your pellet stove. Includes approx $112,500 in up -to -date inventory, with shelves and fish tanks and dog grooming equipment. The seller is hoping you keep his long time employee / dog groomer who has a great reputation in town. The store has great exposure and parking for your clients’ convenience. The dog groomer is booked up three weeks in advance. Lake Cowichan is a picture – postcard beautiful town and this would be a great way to build a special niche for yourself among the locals! 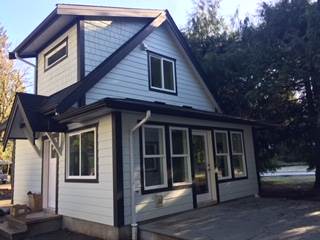 Lake Cowichan’s first new Tiny Home zoning! This beautiful and practical riverfront development is proud to offer this small, very efficient home! It has two bedrooms or a bedroom and den, depending on your personal needs. The open concept living dining area has lots of windows for lovely natural light. Stroll into town for all your daily needs and then come home and dive into the river off your shared deck and then have a leisurely float down to Little Beach where it is just a short walk back home. This small 12 unit development has attracted a collection of independent, diverse people who will soon be your colleagues! Easy to show! 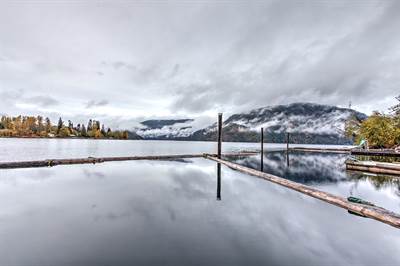 Timeless beauty. Built by 3rd generation European Craftsmen. Many unique carved features by local artist, Zak Stolk, with huge windows taking in panoramic views. Spectacular sunsets looking across at Bald Mountain & Sandy Beach. 72 feet of waterfront, (private boat launch!) you can park your boat and watch the kids jumping off the dock. It can even be made float plane accessible! The kitchen boasts handcrafted wood cabinets and lots of work space. Greenhouse window over the sink. Stone fireplace, vaulted ceilings. Dining areas looking out on the water. Upper floor has a family room with game tables and room for relaxed seating while enjoying the very private, second story deck. Big trees are carefully maintained. Three bedrooms, (1 with ensuite), all on the main floor. Serenity … peace and quiet, yet enough neighbours for safety. The attached garage makes a great location for a workshop or hobby storage. Close to Lily Beach for your walks, but right in Honeymoon Bay. 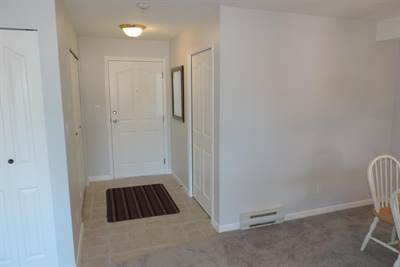 Nicely updated 2 bed 2 bath condo in downtown Duncan. This is a 55 plus building and one small pet is allowed. The condo has been freshly painted, all new flooring, and new fridge, stove, and hot water tank as well as some plumbing fixtures. The condo has a lovely large deck, room for a full patio furniture set. There is a gas fireplace that is open to the dining room and the living room. You are just a few minutes walk to shopping, or there is a lovely park just half a block away. The street is a no through road so fairly quiet. There is also a storage locker that comes with the condo. 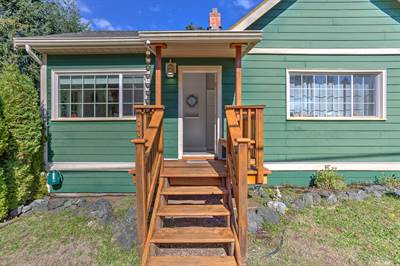 The main floor of this charming rancher features neutral decor with a spacious living room with propane fireplace, an updated kitchen with bright dining area, 2 bedrooms and a large bathroom with jetted tub-shower. Patio doors lead out to a large deck that overlooks the parklike backyard. The backyard borders a park on one side, is partially fenced and has a large garden shed perfect for storing your lawnmower, garden tools and bikes. The lower level is full height with two exterior doors, a half bath and a propane stove and has potential for expanding your living space. Some interior framing has already been done. Hardi-plank siding, thermopane windows and the flooring in the main living areas are other attributes of this property. Recent updates include new electric baseboard heaters, new carpeting on the stairs and some new paint. 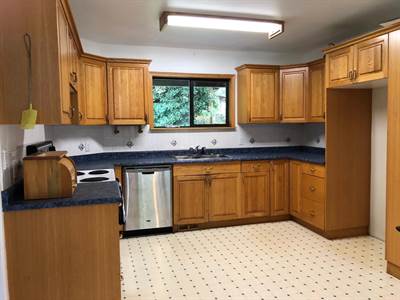 Older home on a quiet, dead end street close to all Lake Cowichan has to offer. You are just blocks from shopping, swimming, hiking, biking, 4-wheeling etc. This property backs onto the Cowichan Valley Trail and is just 2 blocks from the Trans Canada Trail. The home needs some TLC, including windows, but the bones are all there. Electrical has been upgraded and there is a heat pump for the most economical heating giving you heat and air conditioning, as well as a metal roof. Some upgrading has been done but the remainder awaits your ideas.

Does landscaping increase the value of your home?

Absolutely!  When buyers are looking at a property, they are looking for signs it has been well cared for.  This must include the yard.  When you are thinking of ways to add ‘curb appeal’, the yard is a potential buyer’s first impression of your property. Landscape design can add thousands of dollars to the equity of a property.

Structural features; pavers, rock walls, ponds, while eye-catching and can pay off in the long run, are not the only way to increase value. Your landscaping budget does not have to be massive to create an impact. You can plan to budget 5% – 10% of your property’s value to spruce up your exterior.  The important thing is to make a good plan and then stick to it.

A mature landscape plan shows home buyers that the trees and shrubs are well-rooted and appropriate for the climate.  The biggest mistake you can make is to add plants haphazardly.  Have you noticed that many people are opting for “staycations”, where they don’t go to work but they don’t travel anywhere either?  This makes investing in yard you are happy to spend time in so much more valuable in a buyer’s eyes.

If you are going to invest in one type of plant, think of trees.  They add interest in all seasons, provide shade and erosion control, act as a wind/dust break and keep adding more value as they get older.  Trees can also create privacy in a gentler way than a rigid fence line. You should consult an Urban Arborist for trees that are suited to your property.  Just like a puppy, you need to be sure that adorable little tree that you plant today is not going to grow into an unruly, irresponsible adult. According to the Council of Tree and Landscape Appraisers, a sound, mature tree can add from $1,000 to $10,000 to the value of your home.  Don’t forget the benefit the trees provide to the environment as well, producing oxygen and taking carbon dioxide out of the air.  Many homeowners appreciate fruit-producing trees, which can contribute to the self-sustainability that many are looking for.

If you plan to sell within a year, here are some things you should consider doing to get your home ready;

Sandy Stinson had a house for sale.  It was a good house, on a nice piece of land but had only basic landscaping.  It sat on the market for over a year, although other houses in the same price range were selling.  Logic might suggest that the property was overpriced.  The owners took the property off the market but decided to go ahead with some outside upgrades.  They had a modest, but well-thought out, landscape plan and they hired Pacific Group Developments to do the work.  It turned out beautifully.  Several months after the work was completed, the house once again went on the market.  This time the house received multiple offers within days and sold for above asking price!

There is so much uncertainty around this topic.

First, oil tanks are used for heating oil storage.  The oil is then used for oil fired furnaces and boilers.

There are two main types of residential oil tanks. One type is buried in the yard and the other is above ground. The above ground type may be located inside or outside of a building.

Occasionally, Municipal governments will require the removal of buried oil tanks. Surprisingly, some bylaws, in the past, mandated installing oil tanks below ground as they were considered unsightly and neighbourhoods were considered more “upscale” with buried tanks.  This is like how we view underground power lines today.

Over the years it was realized that buried oil tanks would fail, resulting in environmental consequences and heavy costs for the homeowner. The governing bodies then changed the mandatory requirements. Unfortunately, the trend of buried oil tanks had already spilled over to less exclusive neighbourhoods, in appreciation of the perceived lack of “eye sore” factor. This means, a buried oil tank can be found on any property in any established neighbourhood. Due to the associated problems with buried oil tanks, the general adoption of above ground oil tanks began.

Leaking oil tanks are an environmental concern both for soil contamination and ground water contamination. Through runoff, contamination can also spread, affecting streams, lakes and rivers. Remediation is costly and most of us have heard the horror stories. This has resulted in the insurance industry driving a movement to locate and remove any remaining buried oil tanks on the properties they offer coverage for. This prevents further contamination and mitigates risk, even though most insurers have exclusions in their standard policies for this type of damage/loss.  These exclusions leave the homeowner with all the responsibility and the clean-up costs.

Above ground oil tanks are monitored closely by the insurance industry. If tanks are older than 10 years, the homeowner will likely be denied coverage. Insurers may require proof of age and condition and may insist on installation of a new oil tank.

Above ground oil tanks have changed a lot over recent years with many improvements such as double bottom tanks, double walled tanks, and sloping tanks to discharge water accumulations. Now there are not only steel tanks, but hybrids of steel and polyethylene and fiberglass oil tanks. In addition, all oil tanks are now required to have earthquake strapping attached to a concrete base.

As hard as it is to remember, it’s a good idea to monitor your oil tank by sight and smell for signs of leaking.  You may be saving yourself a lot of grief and money if you catch a problem in the early stages.

The age and location of oil tanks is often a topic raised through real estate transactions.  Buyers need to comply with the insurance companies’ requirements as part of a mortgage application. No insurance = No mortgage for buyers. This is the single biggest driver for removing buried oil tanks. Some sellers are proactive and have them removed prior to listing, to assist their sale and potentially save costs, but either way buried oil tanks need to come out. 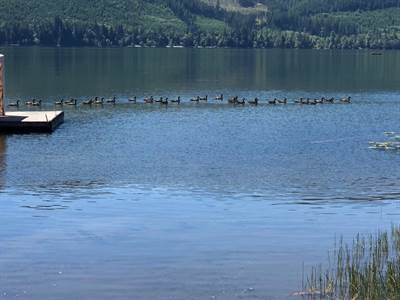 in Youbou, Youbou The ranch at 11406 Youbou Road has been sold.